Recently, it was announced via Twitter that a new feature – currently in beta in just the U.S. for desktop, tablet, and mobile – will show an icon that when clicked will provide a little more information about a source: 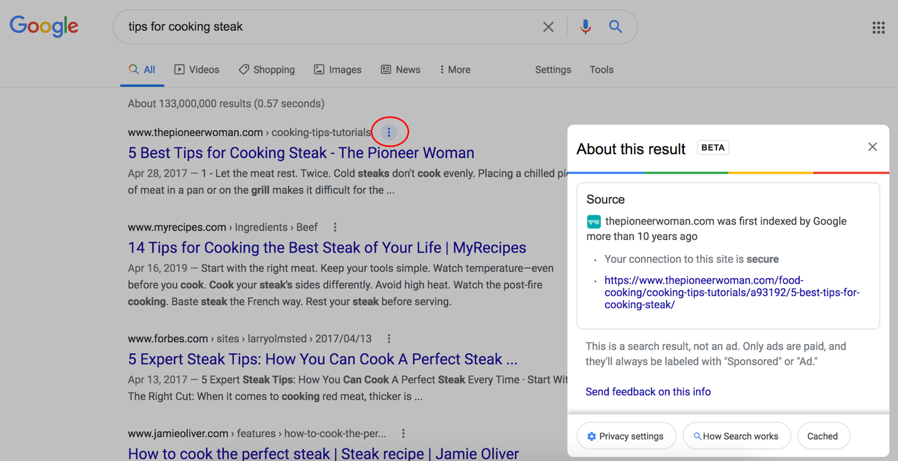 You will be able to learn if a site is secure, find out when the site was first indexed, or even get a snippet of information from Wikipedia:

Lily Ray, a well-known and respected SEO in the industry, was one of the first to comment on Google’s reliance on Wikipedia for information:

Although, I’m on the fence about the decision to show when the site was first indexed if no Wikipedia information exists.

Why rely so heavily on Wikipedia? It’s so hard for many legit brands to get Wikipedia listings.

IDK if date of 1st indexation is necessarily a trust signal. pic.twitter.com/m7opCuaZ4b

While Wikipedia has been the source that many of us were taught in school to not trust for its legitimacy, it is also nevertheless widely used, as well as very hard for smaller companies to get on the site.

One user even went on to call the lone use of Wikipedia gatekeeping, to which Danny Sullivan, the search liaison at Google, responded:

It’s not gatekeeping. We show additional information about the source of a result as an *option* people can choose to view *if they want*. Wikipedia is one source; what we know of a domain is another. As a beta launch, we’ll be looking to further improve going forward.

Given that this new feature is just in beta, hopefully we will see more sources being added over time to level the playing field.