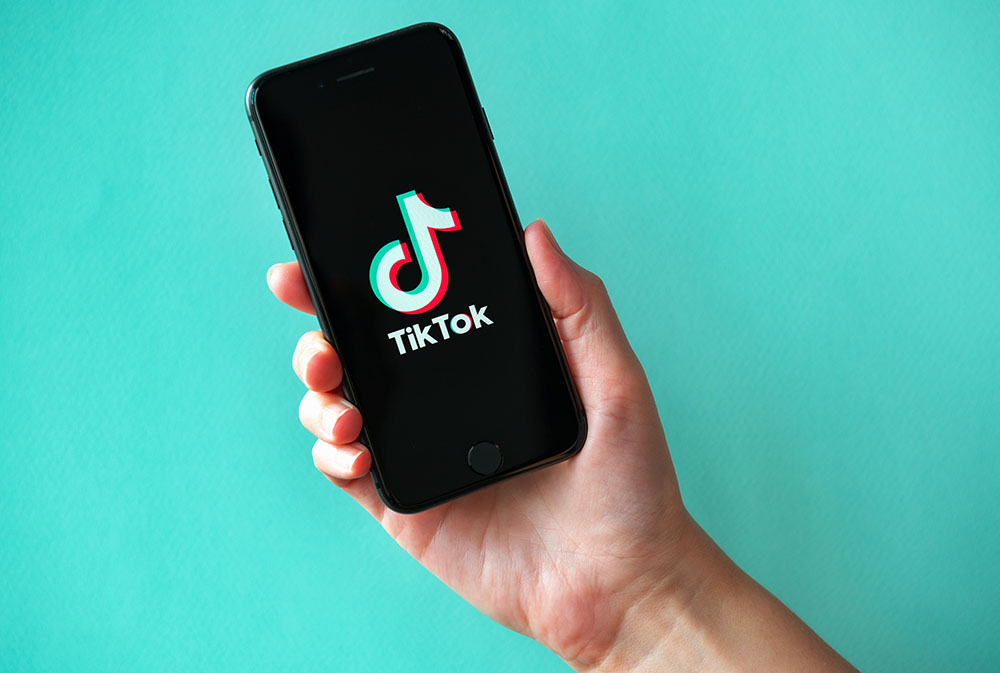 In the past few months, TikTok has taken social media by storm, with many videos attaining household knowledge based on how viral they have become.

What many businesses have failed to realize is that the app is much more than something that preteens are spending large amounts of time on, but rather a widely untapped social media outlet that they should be taking advantage of.

But First, You Should Understand
TikTok’s Algorithm

Just as SEOs know that Google has an algorithm, and much like other social media apps such as Instagram also have one as well, there is a very unique algorithm behind TikTok that controls users’ feeds.

Unlike other social apps, the majority of TikTok relies on a completely customized, personalized feed from their algorithm called the “for you page,” or fyp for short. This system shows each individual user a completely unique feed of videos from not only the people they follow, but also videos the algorithm thinks the user would enjoy based on other content they have interacted with (i.e., liked, commented on, shared, etc.).

This is by far one of the best parts about TikTok when it comes to social media marketing, because unlike other platforms, follower count doesn’t necessarily correlate with interactivity from the app’s users.

Thanks to Oberlo, here are some statistics that might surprise you about the app:

However, these stats don’t even take into account that there currently aren’t any hard numbers showing how many people have made purchases based off things they have seen on TikTok.

But, there are 80,600,000+ results on Google’s video tab for the term “TikTok made me buy it,” which is a YouTube trend where people showcase all the things they have been influenced to purchase from videos on the app.

Author’s note: I, for one, have purchased at least 20 different things since the beginning of 2020 just based off videos that have shown up on my fyp, which totals to an amount I am too embarrassed to share.

Without further ado, here are some of the best tips you can use as you start using TikTok for your business.

One of the easiest ways to create content that succeeds is to make videos that are on trend with popular music within the app. Music often plays a vital role in different trends on the app, such as with the Renegade dance.

For example, you can see that TikTok even acknowledged an up-and-coming trend on the discover tab in the app and showed there are already 691.3k videos using the sound to accompany user content: 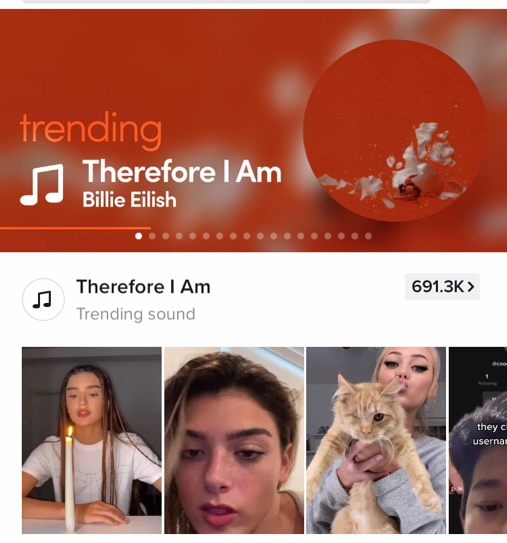 One of the beauties of an app like TikTok is that, unlike videos on YouTube or photos on Instagram, some of the most viral videos on the app aren’t even done with fancy editing or special effects.

You may have seen the viral video of a man drinking Ocean Spray while skateboarding grace your social media feeds, or even on the news! That video goes to show how simple a post can be and end up getting a high amount of likes and views.

Use a Mix of Trending and Relevant Hashtags

When you upload or post videos, you can add a caption to your creation like on most social media sites. And just as hashtags are popular methods for success on Instagram and Twitter, they also are on TikTok. However, a unique thing about TikTok is the hashtags you will see used on videos are not always super relevant to the content, but rather to hashtags used on trending or viral videos. 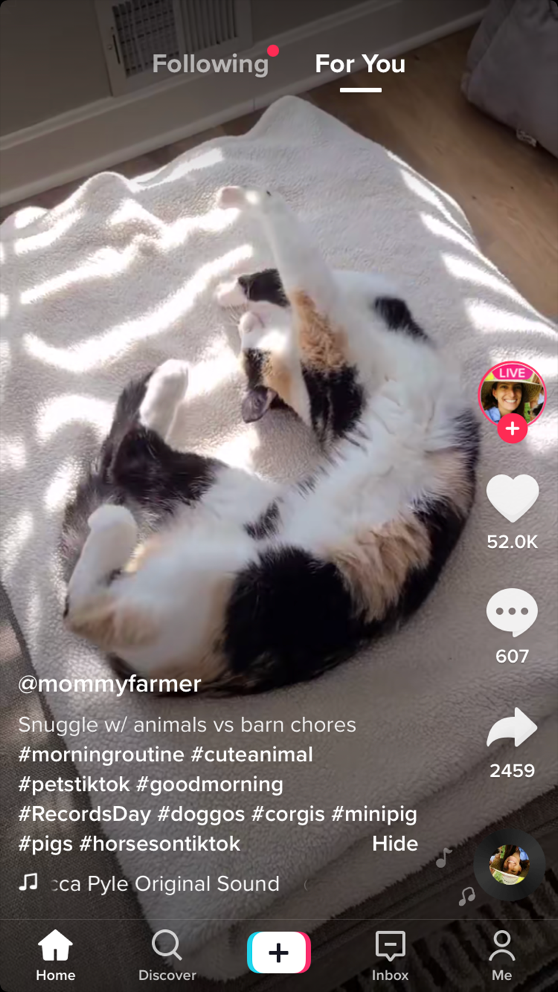 As you can see in the video above, this user showcasing her pets uses a mix of hashtags related to things appearing in the video, but also #RecordsDay which was a trending hashtag at the time.

You can use the explore tab in the app to see current top-trending hashtags and how many videos are using it currently: 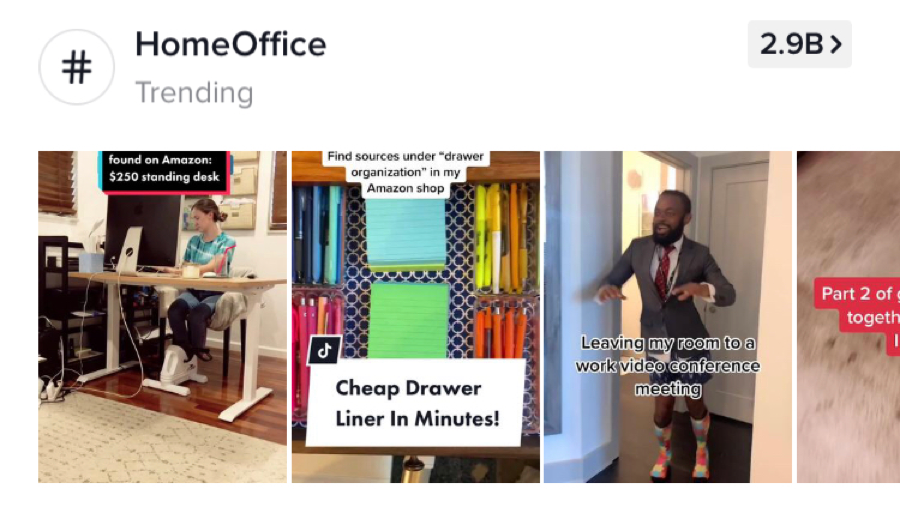 There are also commonly used hashtags such as #fyp or #viral that users believe helps videos show on other users’ individual feeds.

While there are definitely some bigger, well-known names on TikTok (such as Charli D’Amelio), there are also a lot of other users on the app who have their own micro following in specific niches.

This is a great opportunity to explore sponsoring a video by these micro influencers, or reaching out for some sort of collaboration. This can help you maximize exposure on the app without breaking the bank on expensive influencers such as Charli, who now charges around $100k for sponsored posts!

You can find micro influencers by exploring hashtags related to your business and seeing who some of the popular users in the field are. Then just reach out through social media!

Much like you can quote tweet on Twitter, you can repost and add on to other videos you see on TikTok by duetting the video. This gives you the ability to add commentary, mimic a trending dance, and more. 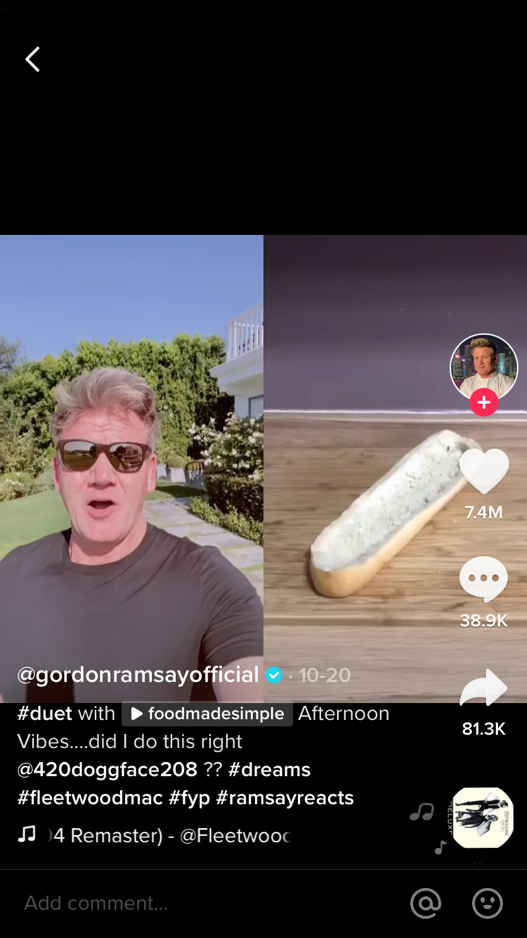 You can see above that Gordon Ramsey did a duet to the video on the right and added his own caption.

Create Your Own Sounds

Even though I mentioned how using trending sounds is a great way to gain views, that doesn’t mean that you need to use them every time. Popular songs and audio all started somewhere, and you could end up being the next virally used sound on the app! And it doesn’t need to be music, because voiceovers, stories, and other commentary have all gone viral on the app.

Reply to Comments with Videos

A newer feature on TikTok is the ability to reply to comments you receive on your videos, with a video! This is really great if you receive a lot of questions on your videos that require a lot of explaining, or want to do something like this user did where he told people to reply with other colors he should use in this art piece: 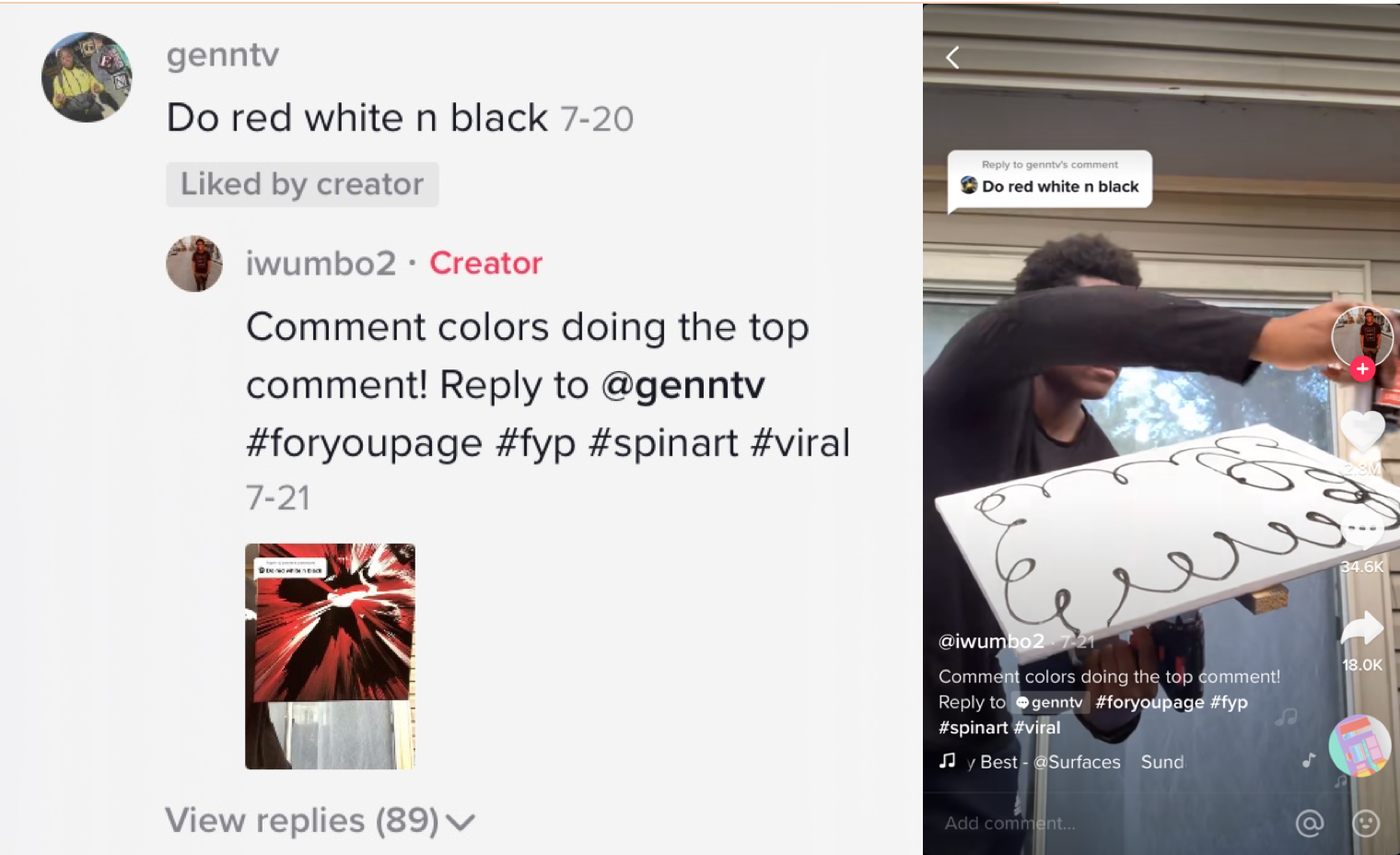 Don’t Be Afraid to Repost

If you post a video you really think has the potential to take off, or just didn’t think it got the right amount of attention it deserves, you can always repost the video at a different time.

This tip isn’t the most creative or groundbreaking, but something that marketers may look past. Be sure to post on your other social handles that you are now on TikTok and repost your content from time to time.

Don’t Be Discouraged by Your Industry

While many business types may not think that their niche boasts anything interesting enough to gain popularity online, you would be surprised at just what types of content people interact with!

For example, there was a Sherwin-Williams employee who started making videos about paint mixing, which some people in the company didn’t think was anything special, but his videos went on to gather around 23.2 million likes!

@tonesterpaintsMixing the most expensive door paint in the world 😳 following back whoever follows my IG!! ##asmr ##paint ##randomthings ##earthday ##paintmixing

So while something at your company may seem boring and mundane, it could be completely unknown to online users and spark some interest.

Check Out Other Social Media Articles on Our Blog