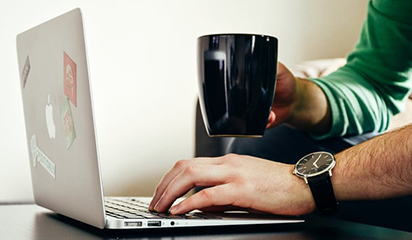 Selecting the right font for your website is a vital aspect in optimizing the site for your customers’ user experience.

Whenever a customer visits your site, they are consciously or unconsciously evaluating your business based on how functional, informative, easy-to-use and organized your site is. While it might not seem like a font would greatly affect these areas, it actually can.

Let’s take a look at what to seek out and what to avoid when working with a web developer to find your ideal online font.

Ensuring that your font is a reasonable size should be step one in presenting your content to visitors. You don’t want to use a small font which will force people to have to lean forward or squint. Not only is this annoying, but it makes them work to discover your content instead of allowing the site to quickly win them over.

For most fonts, 12-point is usually considered the minimum, with 14-point preferred. This can vary somewhat based upon the font chosen, of course, and section headers, page titles, and logos will often go beyond the 14-point standard.

In addition to the size of your font, the line spacing you utilize can drastically affect readability, either allowing the reader to browse your site more efficiently, or slowing them down.

Setting kerning and tracking too close together results in unreadable words, while setting them too far apart looks odd and unprofessional, unless a specific effect is being sought.

Oftentimes, template webpages will have defaults for leading, kerning and tracking, though depending on which sites you’re working with, these defaults can vary. But by being aware of these terms and how they affect your webpage, you’ll be at an advantage when working with a web developer in crafting your site.

Another aspect to keep in mind about font selection is ensuring that your selection stays true to the branding and overall impression you want your business to convey.

For branding purposes, ugly and unprofessional fonts should certainly be avoided, but decisions also need to be made in regards to serif and sans-serif fonts as well as typeface pairing. Let’s take a look at these concerns.

Serif fonts are those which include a small line at the end of a stroke for a bit of flair, while sans-serif fonts omit such lines. Both options produce different reactions in the reader and can play a role in readability.

Going hand in hand with serif and sans-serif selection is determining how you will pair fonts on your site. While you could find a font choice that you like and which coincides with your branding goals and use that for all text throughout your site, some finesse certainly is encouraged.

Oftentimes, successful font choices are those which pair different, attractive fonts together for headlines and body copy.

Two sans-serifs will often work well together for this purpose, though you could use a serif font for headlines and section headers with a sans-serif font for the smaller body copy.

Related to the serif/sans-serif choices is the subject of standard and fancy fonts. More standard fonts are, unsurprisingly, ubiquitous, while fancier fonts are employed for specific uses and effects.

Determining what is a “bad font” is a difficult proposition, because fonts which are inappropriate in certain contexts can be totally acceptable in others. Additionally, some fonts are considered “boring” by graphic designers due to their frequent use, but that doesn’t mean their utility is any lesser.

There are, however, a few fonts which are notorious for showing up at inappropriate times in professional settings, so you’ll want to avoid them to prevent appearing dated or uninformed.

There are many other examples, which a competent web developer can educate you about during your site design. For some further examples, check out 1st Web Designer’s informative post.

Be Mindful of Color

Lastly, the color choices you select for your fonts and website as a whole can affect how your site is received.

You should utilize a font color and background color that properly contrast each other to ensure that readers don’t struggle with reading your content. A simple black text on a white background is obviously the standard, though the inverse can work for some purposes, and various contrasting colors can additionally work well.

There are numerous variations on these examples, and many major companies have utilized the psychological effects of color to great benefit. For a further look at the science behind color selection, check out Fast Company’s insightful post.

As you can see, a lot goes into the font selection of your website to ensure that you’re presenting your company in an ideal way. For further insights about web design, along with search engine optimization methods, be sure to follow the Sixth City Marketing blog. 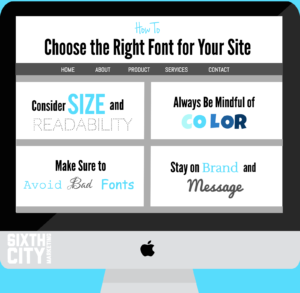