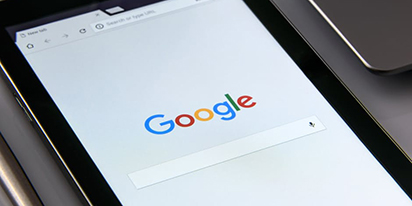 Anyone old enough to remember the early days of the Internet recalls the “wild west” aspects of the first websites, in which content was haphazardly thrown onto pages with little regard for readability, functionality, layout, and in many cases, quality. For a fun time capsule of examples, click here.

And while many of these problems can be chalked up to the simple growing pains of a new medium, there’s no excuse twenty years into the popularization of the Internet for these problems, or ones like them, to persist.

Large-scale sites operating with pages that make it difficult, if not impossible, for users to engage with, absorb, or in some cases, even see the content of the page is no accident, nor is it incompetence. It is transparently deliberate.

What Do I Mean By Junk Food Sites?

We’ve all seen them, and all too often we’ve fallen victim to their clickbait sales pitches. “15 Celebrity Pets’ Halloween Costumes? 25 Lies Back to the Future II Told Us? 8 Ways Terry Bradshaw Changed America? I’m so there!”

And while “listicles” have been criticized heavily in the past, I wouldn’t state that listicles are outright junk food sites. Lists are an easy to create and easy to digest format, so it’s no surprise they’ve become so popular. Not only that, but terrific content can be generated in the list format – it all just depends on how the form is utilized.

Some sites, like Cracked, have greatly used the list format to their advantage and have created engaging content while doing so. Cracked also has the distinction of using writers with a level of expertise in the area they’re writing about, or at the very least writers who research their material.

So the issue isn’t specifically lists, so much as all the other problems attached to certain lists, namely:

Thus, “junk food sites” as I would define them then, are sites that are bad for the user, bad for the provider long-term, and also bad for the Internet at large. But much like junk food they are simple, cheap, and designed to be highly alluring.

Below, I’ll delve into each of these problem areas and explain the techniques junk food sites use to manipulate SEO results.

There are many examples of this problem to be found, with numerous variations. You’ll find pages with poor grammar and spelling, a clear lack of proofing, a misunderstanding of the source material – the list goes on and on.

At first glance, this is perhaps the most forgivable sin of junk food sites as it’s easy to say incompetence is a factor. But I would argue that the writers creating the content are merely trying to produce as much as possible as soon as possible, and no care is given to ensure quality or accuracy.

A good example is this screengrab from a site called Veemly. 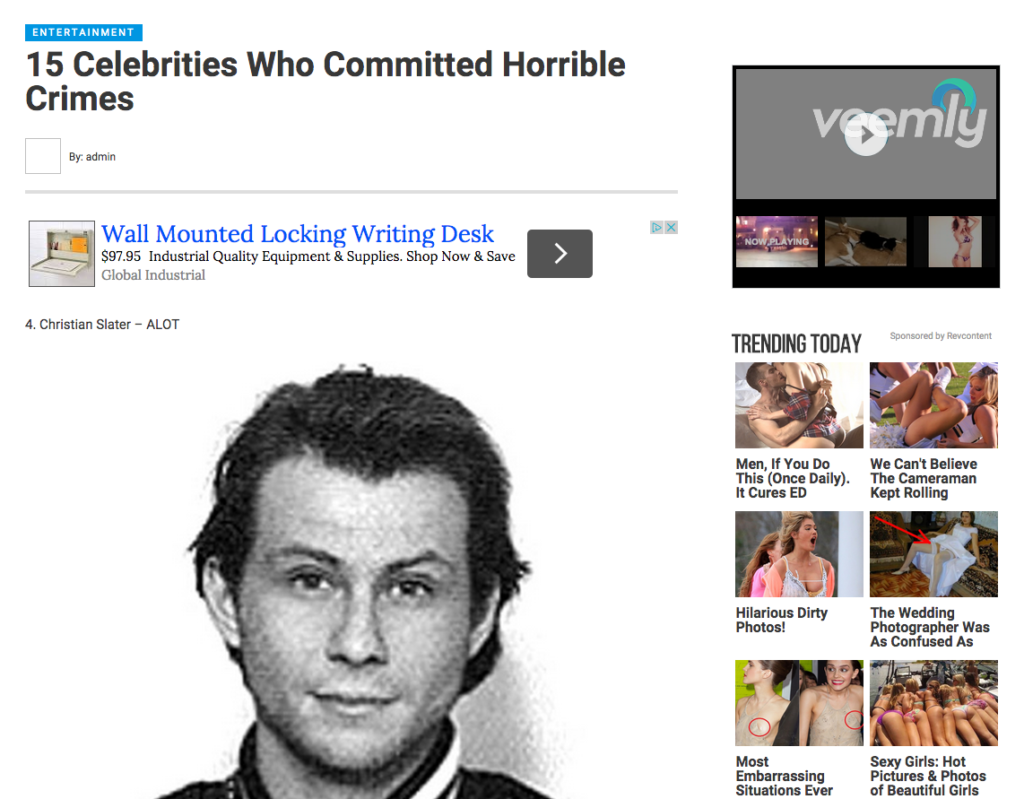 It might not look like much, because it isn’t. This list of “15 Celebrities Who Committed Horrible Crimes” provides no content for a user beyond a single photo of the celebrity in question and the naming of their crime with no details whatsoever.

This example is particularly terrible, as not only does it not tell you the “horrible crimes” Christian Slater committed, it gives you an all-caps, ungrammatical “alot.” Tell me, Veemly, why did I click on this again?

This noxious technique is becoming more and more common, sadly, and it does nothing to improve the user experience.

In one version of this technique, information is presented in the slideshow format with content stretched out unnecessarily over multiple slides. In another version, information is split across entirely different pages, which raises its own issues. Let’s look at a few examples. 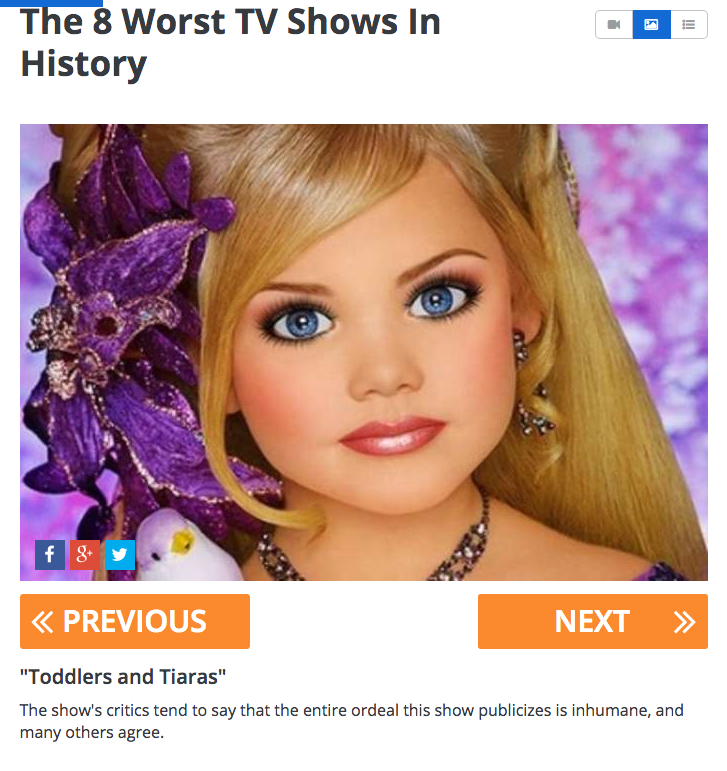 In this list of the “8 Worst TV Shows in History” from Answers.com, all of the eight individual units of content are further divvied up into smaller units for no seeming reason other than to increase time on site.

You can see from the above example the content is also about as empty as can be. 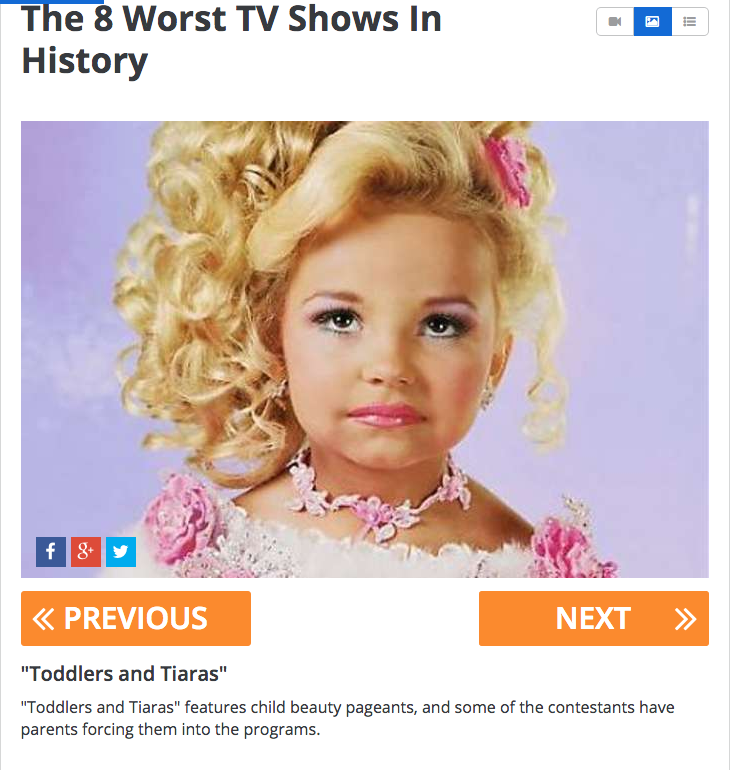 Next slide – same subject – and nothing of real value has been added. 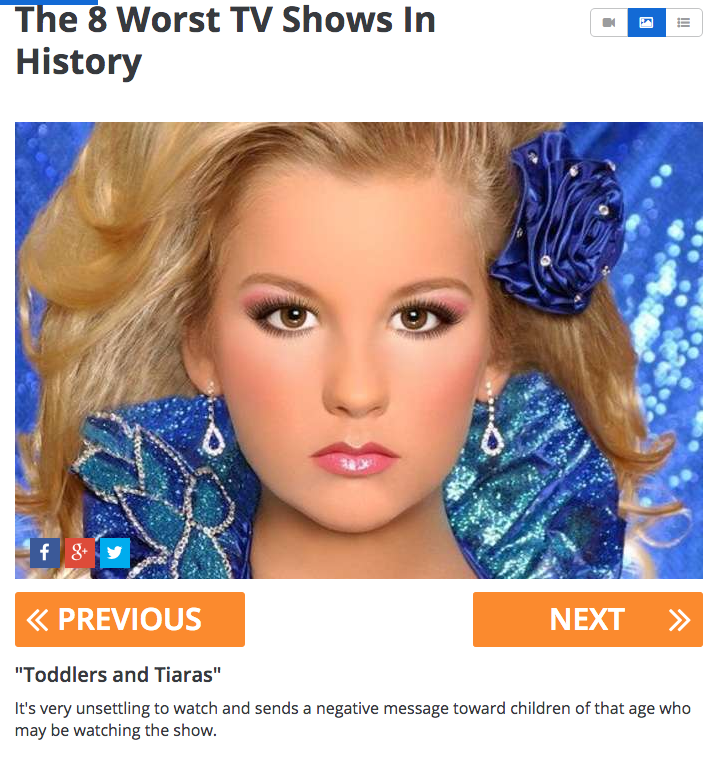 Our third slide, and still very little worthwhile information is being conveyed to the user. But the provider has managed to keep you on their site for a longer duration. This technique becomes particularly manipulative of both users and analytics when slides or lists are split across different pages creating page inflation.

In an example from Health.com, “20 Celebrities Who Battled Depression” is our subject. Let’s say we’re on the page for Owen Wilson and have finished it (this site does actually provide some written content of value) and we want to move on.

Once we click, we are taken to a new page for Paulina Porizkova. So even though we came to this site to read what should be a single article, the site has now manipulated results to make it appear as though we are just exploring everything they have to offer, and lowering their bounce rate.

One page becomes “twenty pages” and the user has gained nothing except load times, increased data usage, and frustration.

This is another technique I needed to christen with a name because I don’t believe there is one. This method, often used in conjunction with unnecessarily divided content/page inflation is implemented to increase clicks on other articles and ads.

The technique employs moving buttons so that the user will need to scramble around the site to locate the next button to be able to advance. 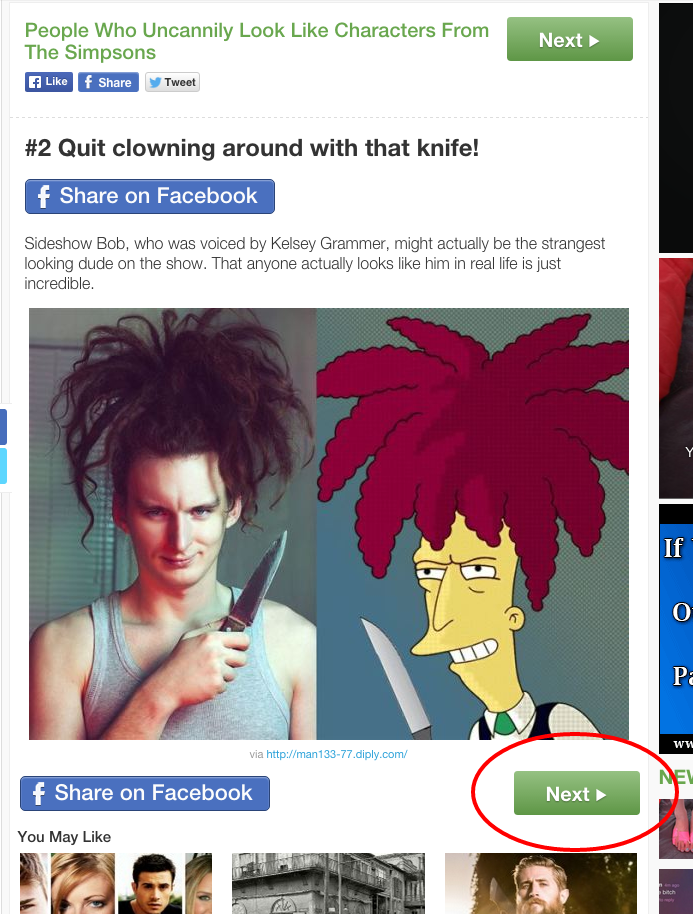 This example from Likes.com dedicated to Simpsons lookalikes shows the circled location of the advancing button and where a user’s mouse would be.

If we click on next, we’ll encounter a problem, though. 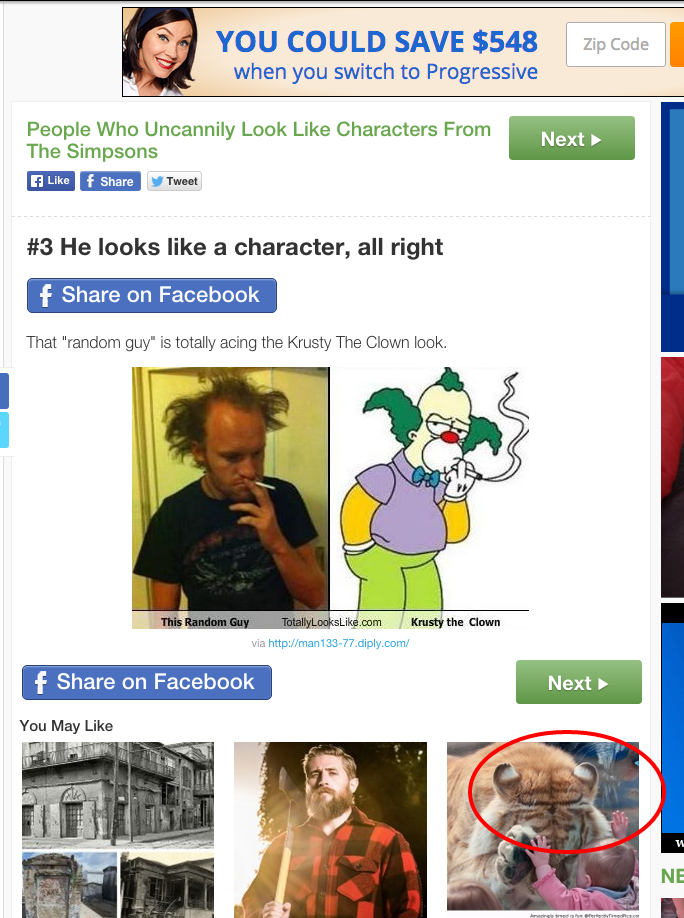 As you can see, the page content has shifted (as it does for every slide) and the location of our mouse would now hover over an unrelated piece about “hilarious photos.”

The site makes it impossible for us to seamlessly click through the content and instead is doing everything it can to take us elsewhere. We’re already here – why make our experience terrible?

Unlike the previous examples, this wouldn’t directly affect SEO, but it’s symptomatic of how slapdash these sites are designed, with clicks being the motivating force at the expense of content.

Take a look at this pic from the Suggest.com post “14 Reasons Dr. Reid from ‘Criminal Minds’ Is the Man You Need to Marry.” 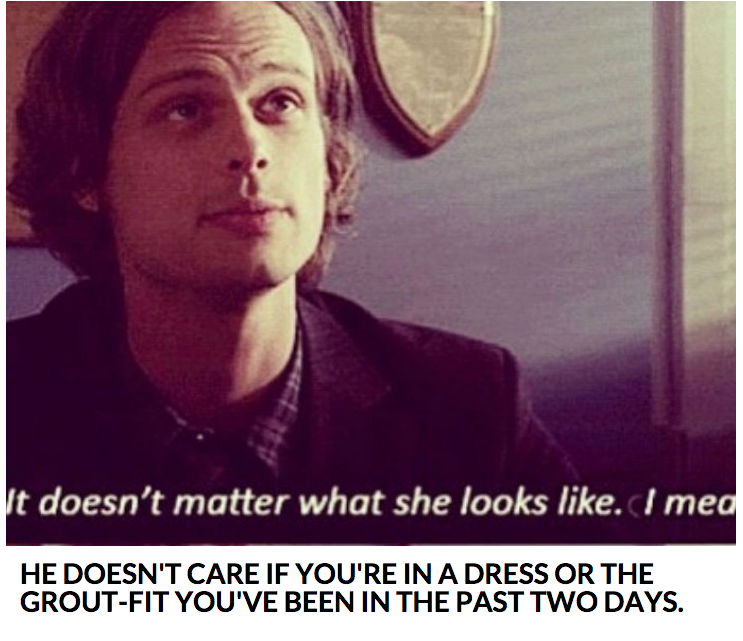 Not only does the picture look like it was snapped by a Polaroid off of a worn-out VHS tape, it contains unnecessary, distracting, and incomplete subtitles. We have no context for the statement, so does it really enforce their caption?

The reason for this kind of selection is obvious – “This is the first picture I found and it is good enough!”

Why All This Matters

It should be clear by now that junk food sites are terrible for user experience and are explicitly designed to manipulate time on site, PPC, and bounce rate.

Now, you may be thinking to yourselves, “Well, of course these sites are awful and manipulative, but what do you expect?” I would say that just because this is the norm does not mean that it should be, nor that it will continue to be. At one time both keyword stuffing and invisible text were viable, if highly manipulative, techniques as well.

But what’s really troubling is that these kind of black hat tactics are effective enough to attract providers that should have no business using them.

It’s one thing when Answers, Like, Suggest, Veemly and hundreds of other less than reputable sites do it. It’s something else altogether when Forbes stoops to this level.

Here’s a screengrab from Forbes’ list of “The Most Conservative and Most Liberal Cities in America.” I clicked on this out of genuine interest, and because it was Forbes, I assumed worthwhile content would be provided. 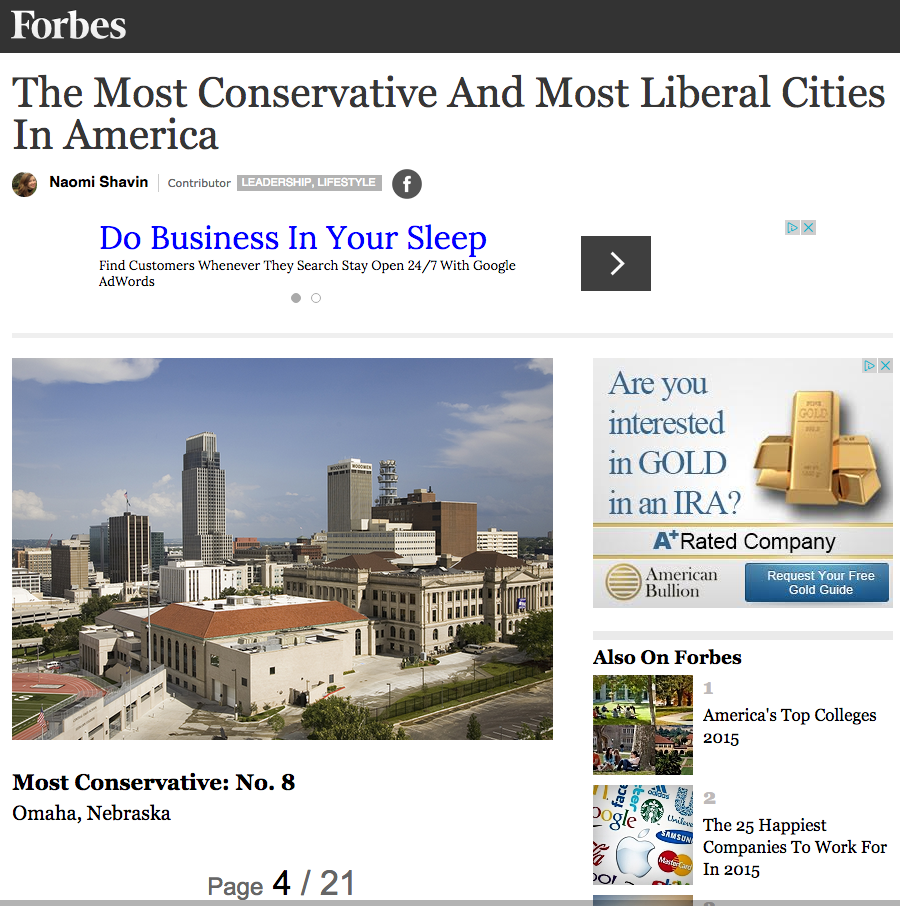 What I received instead was a list of pictures, a numerical ranking, and absolutely no context for the information at all. What is it about Omaha that makes it so conservative? Has it always been that way, or have demographics and political allegiances changed over time?

Forbes, sadly, isn’t interested in providing anything valuable to the user, because, “Hey, we need those clicks.” And their tactics are particularly manipulative because they are not only engaging in arbitrarily chopping up the (already minimal) content, but they’re also page inflating by turning their simple list of twenty pictures (let’s be honest) into twenty unique pages of pictures.

Guess it’s time to block Forbes from my newsfeed.

And that is the last lesson of the day. If the horrible user experience hadn’t already convinced you of why these tactics are a bad idea, I’d argue that they are also just terrible for business.

Consumers aren’t going to engage with your site if you make their experience a headache at best and transparently manipulative at worst. Like many people, if I get fed up with how a site operates, I close the tab and take my business elsewhere.

To be fair, we can blame ourselves to some degree for consuming the pop culture and gossip junk food sites, but I don’t think we should need to be wary of major corporations using these techniques. If they do, we should stop visiting their pages, and Google should devalue these techniques and penalize providers’ rankings.

In short, let’s all stop eating the junk food.